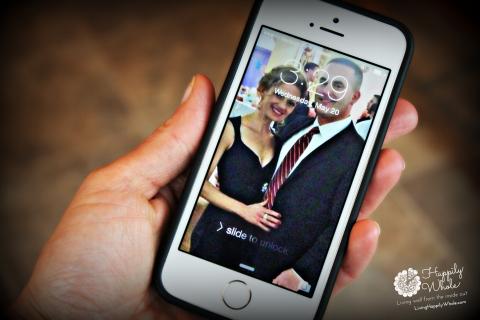 Sometimes things surprisingly complement each other.  Like two flavors you'd never pair but when you taste them together, they tantalize your tastebuds leaving you wanting one more bite over and over again. It's that way with people, too, you know. It happened to me about nine months ago, actually.  God placed something (well, ummm, someONE), in my path, who someHOW seriously complimented me. Dare I say, we complimented each other. But we found it first only in conversation.

After a prolonged period of resisting, I slowly started realizing we share some lovely commonalities. This, during a time when our relationship was limited to ‘chatting’ through Facebook Messenger. (How it all started is a story I’ll save for another time!) These internet conversations continued daily, along with a healthy dose of my denial, for at least a month before he (yes, this was the first time a 'he' remotely retained my interest since the passing of my sweet husband) asked if I’d like to see him...IN PERSON!

So, we ‘chatted’ some more. Another week went by when he nonchalantly hinted at an in-person meeting again. His attempt at keeping my anxiety at a minimum went something like this:

Hanging out getting to know each other.’

I set my iPhone down where I'd been lounging on my bed, walked away and prayed. It was a desperate, 'open it wide or slam this shut' kind of prayer. I proceeded to brush my teeth, put on some pajamas and slowly, very slowly, approached my phone where he was waiting for a response.

My answer: No. Not yet. But this time I asked him if I could let it marinate a while and take an invitation-rain-check.

You see, when you’ve been alone a long time, no amount of conversation naturally makes you feel like you’ll ever find a real compliment again. Especially when all the adulthood complications like kids, homes, independence, and routines exist. I believed I was destined to never call someone my ‘compliment’ again. I 'd settled into 'my call' to remain single, no man ever again inhabiting that part my heart….even though I could feel God nudging me in another direction.

She got an earful as I purged all my worries, wonders and doubts about dating. There, I said it! Dating. A young widow entering 'the scene' is not quite as thrilling as you may think it seems. I mean, I have a lot of love to give…a LOT. God just keeps filling my cup! But, even more than a fear of sharing my overflowing cup of love, I feared the idea of losing love—again. So, not only had I no interest, I had deep resistance.

She finally talked me into it. She encouraged me and all but held my hand as I pried open my laptop, pulled up Facebook, searched for his name and prepared myself to tell him I was ready. (Only AFTER she, being a loyal and protective friend, stalked his page for any red-flags—none glaring. I guess it was a ‘GO’).

So, I sent my affirmative RSVP by saying I was ready. My heart fell into my foot, my mind went numb and my stomach instantly tangled itself into a web of retreat. I wanted to retreat!

Too late! Just a side note: You cannot retract what you write on a Facebook private message. PANIC!

He responded within seconds. Literally. I know this because I wanted to WAIT longer! His response looked just like this:

KATIE! ~Insert BIG SMILE FACE emoji~ (one of those really BIG smiley faces) My friend laughed and said, "I think he’s excited."  I almost threw up.

He has since tried to deny his obvious and instant enthusiasm. But, not only can you not retract Facebook messages once you hit ‘send’, you can also trace conversations all the way back to the beginning. Yep, I can prove it with evidence from the records. (He knows a little about evidence since he’s a detective….only the FACTS!)

The whole process of preparing myself for our first date was painstaking. Maybe I’ll tell that and some funny details of our first few dates in another post. For now, I’ll just say it was nothing short of a work of God that I pulled it off with complete (well, almost complete) composure when he arrived that first time. I MAY have made a few silly statements, incriminating confessions or accusatory assumptions about him--out loud to him. But, now, there’s no public record of THAT!

My whole point in telling you this is that God is GOOD. And God is SO good at being GOD. So, just how I had to learn to seriously surrender, allow Him to move in your life. Trust Him with your time, energy, problems and, YES, your relationships. He knows what compliments us in each season. And when we resist, we might miss out on something (or someONE) who makes the perfect match, an unexpected complement.

I never, ever, in a million years thought I’d be talking about another man on my blog. But here I am. My human side still sometimes trembles with fears of all the potential complications. But it's a healthy trembling, one that leads me to more faith, trust and surrender. Still, only GOD knows exactly what the future holds! But my faith tells me He will calm my nerves and compliment me with what’s just right for my life. I believe He WILL iron out the complications to create something sweet in whatever recipe He has cooking up!

Just like that, recipes once again inspire my conversation! And, it's this deliciously sweet, grain-free brownie recipe containing two of my favorite foods, sweet potato and avocado, surprisingly complementing each other.

(By the way, I'm the sweet potato. He's the avocado. Just saying.)

GO to the recipe here: Brownies 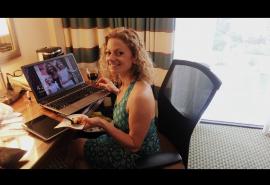 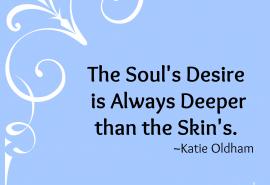 Self-Reliance vs Soul-Revolution: a new approach for your resolutions 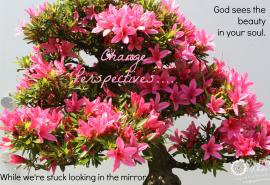