Reverse Sacrificing for a Cross-Revival 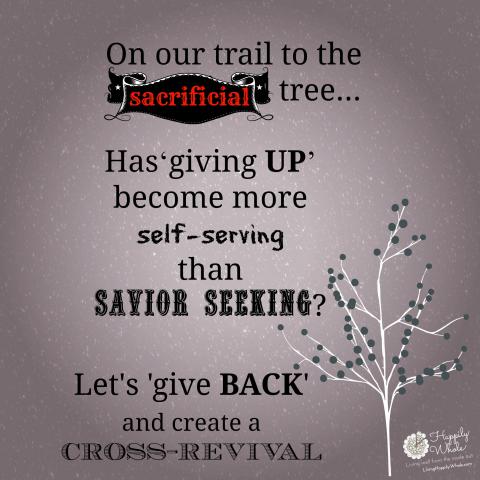 Ever wonder why some Christians give something up during Lent? Maybe you do. Is it tradition, the special marking of a season or truly the sacrifice of something significant to signify our Savior’s ultimate sacrifice?

Maybe it’s presumptuous, but I’d venture to say perhaps some take ‘giving up’ for Lent a little too far…too far from its spiritual intent, to be exact.

Maybe ‘giving up’ has become more self-serving than Savior seeking.

Because, you see, when the tradition of sacrificing something for the season started, we were never meant to seek methods of ‘self-help’, but a means to humble our hearts. The spiritual intent originated to produce a small semblance of Christ’s ultimate sacrifice, as a way to identify with Him and dedicate some suffering in recognition of His death for our sin. In giving up, the idea is to GIVE BACK to He who gave it all.

But truth is, even with small Lenten sacrifices, it’s never possible to suffer, sacrifice or diminish ourselves enough to grasp the extent to which our King cowered on His way to the cross.

It seems oversimplified…perhaps even insulting, especially if your heart's not right.

Giving up cake or carbs, letting go of little things of this life, forgoing Facebook or forging ahead without what we feel we ‘need’ is MINUTE in the master plan for which Christ expensed His life. So, whether ‘giving up’ for Lent is about real self-sacrifice or its turned into a self-serving practice, it’ll never make a mark, even as small as a speck of sand, on the weary world He sanctified in His sacrifice.

Instead, why don’t we turn our trek to the sacrificial tree into something that sweetens the bitter senses of a society who’s forgotten the relevance of giving up? Why not transform our modernized version of self-sacrifice into a heart-felt falling to the foot of the Cross, the only place we can ever really fill up.

Instead of giving UP let’s give IN, enlivening our fleeting faiths. Better yet, let’s GIVE BACK into the brokenness that beats hope out of a hardened world.

Because you see, the best form to sit at the foot of the Cross is as a servant giving back,

as someone who serves our hanging Savior who emptied Himself serving US!

Let’s look at Lent as a time to fill our Savior’s hurting heart with our love for Him, with real repentance so we can receive the gift He died to give us, placing an aching gratitude from our humble hearts to His outstretched arms.

Let’s use Lent to fill the holes in Christ’s hands and feet with our hearts every beat….

Now after all that, I’ll go back to the beginning and ask you differently: What if, just what would happen, if we let go of giving up something self-serving for Lent and instead we took up a walk to the Cross?

We could sit there, sinking into the costly comfort of our sacrificed Savior and see exactly how we can give more of ourselves to Him instead giving pieces of ourselves up. And as we sink to our knees, brow bowed at His broken body, we would know how much we owe:

an amount that stretches beyond everything we own and anything we are.

At the cross, we’ll see that serving Him in honor, love, repentance and through our faith’s REVIVAL is the type of reverse sacrifice that gives back to a world where WE ARE His hands and feet.

Our reverse-sacrifices allow others see the only Savior who can ever really save us! If we settle for giving up simple things of this life, who will see the meaning of the Cross in us?

What if we take up praying at the same time each day?

Take up serving someone every day Jesus’ way?

What if we take up real repentance or looked for ways to love a world filled with real hate?

What if, for Lent, we land hard on our knees at the Cross and linger right there because giving up carbs or candy doesn't further His kingdom?

IT’S WHAT HE DID FOR US?

And He redoes it every day...

(And the truth is, when we’re giving IN instead of giving UP, we’re still emptying ourselves, creating space to fill up with more of Him.)

So, yeah, let’s BE His light during Lent so something in this world shines.

And one more thing….

What if we kept it up all year long? In this world where the meaning of the cross has collapsed, we could create a Cross-Revival! 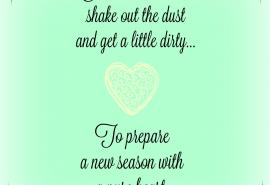 Prepare for a New Season with a Pure Heart

From Brokenness to Blessing